Students read a simple version of the folktale in a manga format and answer 3 questions on the story and themes. Students are introduced to the “tanuki” and learn a Japanese song with 4 animal names and sounds (こぶた、たぬき、きつね、ねこ).

The Miraculous Teakettle is the tale of a tanuki repaying a human kindness.

Just as in English folktales begin with ‘Once upon a time….’ Japanese tales begin with the following expression:
「むかし、むかし､あるところに ……… がいました。」 And in the end, if they all live happily ever after, the Japanese say: 「めでたし、めでたし。」

What is a tanuki?

A tanuki is a badger-like raccoon dog native to East Asia. The tanuki’s fur was used for clothing and its hair was used in high quality writing brushes. In folktales the tanuki, like the fox, was portrayed as a sly animal who tricked humans by changing itself into various forms, but unlike the fox it was thought to be a bit of a bumbler and hence amusing rather than fearsome. Both animals change their form by putting a leaf on their head.

An iron teakettle was used to boil water for the tea ceremony, which was conducted in certain Buddhist temples. The temple referred to in this story is the in Chiba, which was built in 1426. It is said that the teakettle is still kept there today.

Translation of the Story

Long ago, there lived a man who was kind to animals. Although he was poor, he shared his food with the animals who came to his home. A tanuki who had received food from the man thought of a plan to repay him for his kindness; he would turn himself into a teakettle, which the poor man could sell to the local temple. The man sold the kettle to the temple priest and with the money bought a plentiful supply of food.

Later that day the priest put the kettle on to boil water for the tea ceremony, but to his surprise the kettle tuned into a tanuki crying ‘It’s too hot!’ Disappointed, the priest sold the kettle to a passing tinker, who took it back to his shop. That night the tinker was woken up by the sound of crying. The kettle had turned back into the tanuki, who was afraid of being sold again. He begged the tinker not to sell him, promising to earn him money by performing in the marketplace. Every day the tanuki danced, sang and did tricks before an admiring audience, and the tinker became rich.

After a time, the tanuki became tired, and yearned for a peaceful life as a kettle in a temple. The tinker offered to take him back to the priest, and the priest agreed not to use him to boil water, and to look after him in his temple. People came to pray for happiness to the teakettle, and soon the news spread far and wide that it brought good luck. And that’s how it got its name (the kettle-that-brings-good luck)!

Read the Teacher’s Notes on raccoon dogs and foxes in folktales.

Read the Teacher’s Notes on folktales. 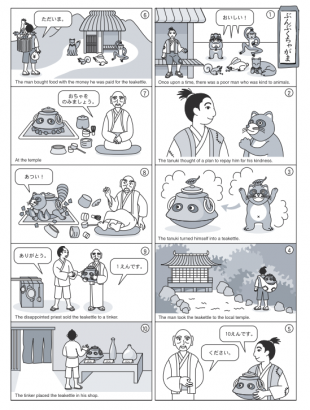 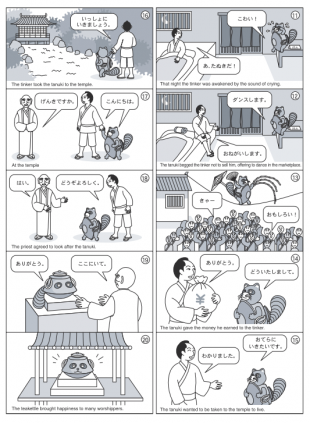 Resource created by The Japan Foundation, Sydney (May 2002).