Learn to construct your own fictional manga and anime world with published manga illustrator, Queenie Chan!

Exploring the basics of world-building for manga or anime, this workshop will help you gain basic understanding of how to give your story a distinct visual identity by creating architectural structures or character costumes unique to their world.

This workshop will not tackle the basics of drawing. Workshop participants do not need to have advanced drawing experience but are expected to have some basic drawing skills. 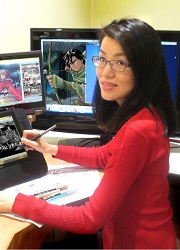 Queenie Chan was born in Hong Kong in 1980. At aged six, she migrated with her family to Australia where she grew up and later graduated with a Bachelor’s Degree in Information Systems. In 2004, Queenie started drawing a 3-volume mystery-horror series called, “The Dreaming”, for LA-based manga publisher TOKYOPOP. To date, it has been translated into multiple languages.

She has since collaborated on several single-volume graphic novels with best-selling author Dean Koontz, as prequels to his “Odd Thomas” novel series. She also worked on “Small Shen”, the prequel to Kylie Chan’s “White Tiger” Chinese fantasy series, and “Fabled Kingdom”, a 3-book fairy-tale inspired fantasy adventure told in a mix of prose and comics.

Currently, she is planning work on her next project.

This workshop is now booked out.

(Book Now button will lead to the Eventbrite ticketing page)

MATERIALS
Paper, pencils, erasers and rulers will be provided. However, participants are encouraged to bring their own materials if they have particular preferences for drawing tools (sketchbook, lead pencils, etc.)