This exhibition shares the work of two generations of Sydney-based bonsai practitioners, Megumi and Alex Bennett, who express the Japanese tradition of bonsai in Australian native plants such as fig trees. Tracing the legacy of bonsai knowledge in their lineage, the bonsai reflects the artists’ Japanese backgrounds embracing Australian identity.

Cultivating miniaturised trees across a range of species, Megumi and Alex Bennett’s collection of bonsai show a range of techniques uniquely in tune with their Australian environment. While their traditional training in Japan instilled knowledge based on Japan’s distinct seasons, weather patterns and species selection, the two generations of bonsai practitioners have translated this knowledge to the Australian context by experimenting with local species and techniques over decades.

Featured in this exhibition are several Port Jackson Fig bonsais – known and loved trees on the streets of Sydney – nurtured into a miniaturised scale while maintaining a rich sense of character. The trunk and aerial root structures of the Port Jackson Fig allow Megumi and Alex to sculpt playful forms which at times invert the expected: the second trunk in the ‘two trunk style’ bonsai is grown from an aerial root on a branch. Megumi describes, ‘the balance of trunks is perfect and beautiful’. 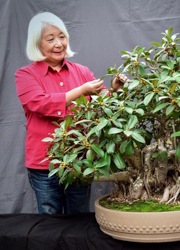 Megumi Bennett has been practicing bonsai for over 40 years. After observing her grandfather tending to his bonsai plants, Megumi studied the tradition in Japan, along with ikebana (the Japanese flower arranging tradition). After migrating to Australia in 1974, her bonsai training took root here, and she adapted her repertoire to the unique conditions of botanic life, weather, and seasonal changes in Australia. In 1999 Megumi founded the Bonsai Society of Sydney Inc., she is also a member of the Nippon Bonsai Association and Ikebana International. In 2008 Megumi received her bonsai instructor’s qualification from the Nippon Bonsai Association, Japan and was the first non-Japan residing practitioner to receive this accolade. 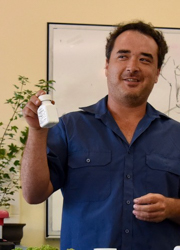 Alex Bennett, Megumi’s son, was drawn to bonsai at a young age by the balance of creative expression and working outdoors. Alex’s bonsai skills were refined in 2000, through two years of intensive bonsai training as an apprentice at the pre-eminent bonsai nursery Mansei-en in Omiya, Japan. He now practices as a professional horticulturalist and bonsai teacher with over 23 years’ experience.

* The exhibition opens at 11am on Monday.