The Japan Foundation, Sydney was pleased to host 30 participants at the Intensive Seminar for Teachers and Pre-Service Teachers (targeted at Junior Secondary) from January 14-17, 2019.

We’d like to say a big otsukare-sama to all those who attended and we look forward to meeting more senseis at our future seminars.

We have included 感想 (kansou; impressions) of some of the January participants below.

So, when is the next Intensive Seminar?

The next intensive seminar, which will have a primary focus will be held September 30 – October 3, 2019. Applications will open in May. Please check the intensive seminar website for updates. 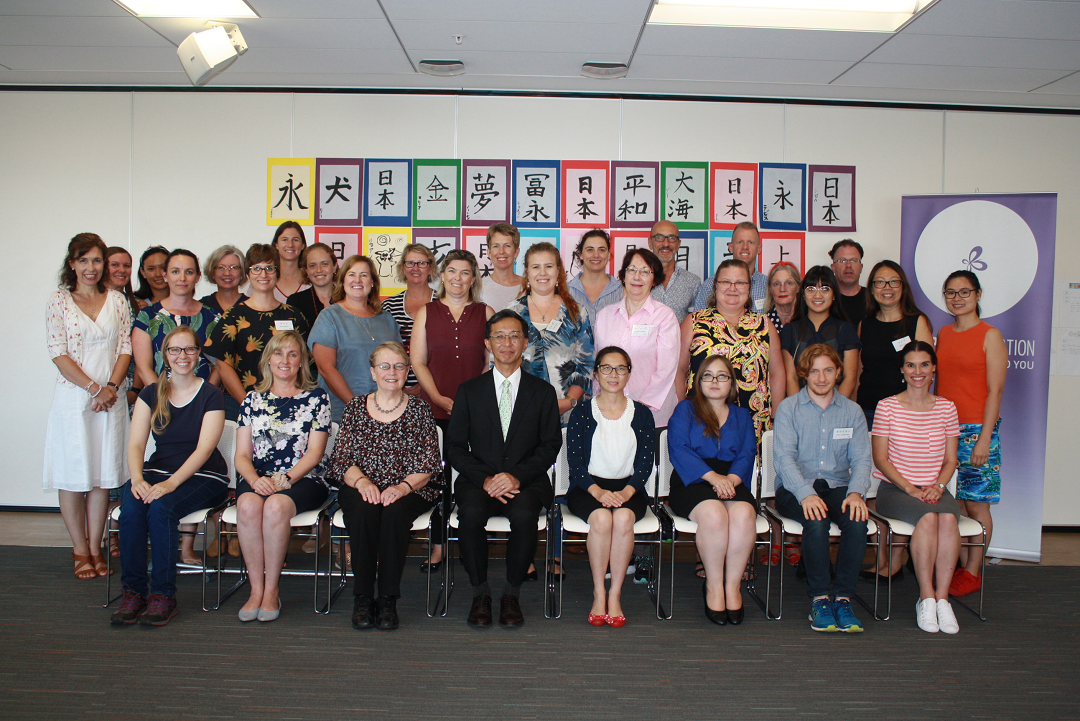 「ミニ日本へようこそ！」The coordinators of the JPF intensive seminar for teachers did an excellent job of transporting us to Japan every time we stepped in the building. From language sessions to cultural workshops to the snacks served at morning tea – every thoughtful detail helped add to the experience.

My favourite part of the week was working with a small group of teachers to prepare interview questions for the 楽し会話 session. It was so rewarding to have our simple set of questions lead to so many interesting conversations. We listened to someone sing a song from Okinawa, heard stories about getting into trouble overseas and shared opinions about sudoku – all in Japanese! Doing this in a group meant that the conversation could continue easily without all of the pressure being on me. It was great that I got to learn more about my fellow teachers as well.

I have been inspired with many ideas to take back to school with me and I am so grateful that I had this opportunity. 本当にありがとうございました！

My participation in this year’s intensive seminar was well worthwhile. In the lead up to the seminar, I and all other participants joined an Edmodo group which allowed us to do a number of things including uploading practical classroom resources, which each of us have used in our own classrooms to good effect. It provided the opportunity for us to learn from each other even before we met in Sydney, which was great. Also, by having those shared resources available online after the seminar allowed each of us to share those resources with other teachers in our various state and territory networks on our return home.

On the first day the teachers were given a spot test which allowed the Japan Foundation staff to divide us in to two groups based on language proficiency. Later in the week we were divided into three groups but more on that later.

Teaching sessions were, for the most part, presented in Japanese. Although challenging for me as an N5 level speaker of Japanese, I nevertheless found the challenge of listening intently, focusing on what I could understand and allowing myself to be immersed in the language most helpful.

Other sessions examined key components of the Australian Curriculum as well as the excellent array of online teaching resources which have been developed and continue to be developed by the Japan Foundation.

Other times allowed teachers to share with each other (sometimes in English and sometimes in Japanese) ideas, resources and effective teaching and learning strategies and activities each of us use in our own classrooms as well as getting and giving feedback on how such resources might be improved or modified. The mutual collegiality of such sessions is invaluable along with the networking they provide.

Topics like the environment, water and Hokkaido were presented interactively by Japan Foundation staff. These sessions demonstrated how one could teach across curriculum areas in Japanese. The sample units of work which we went through, as though we were students rather than teachers, could be adapted for use at different grade levels. The particular intensive seminar I went to this January was mostly aimed at the Year 6/7 and 8/9 levels of High School.

One part I particularly enjoyed was the preparation for and participation in a conversation session. We were put in pairs or groups of three. Each group, with assistance, prepared some questions and answers to use later that day in conversations with native speakers. Each group got to speak with three different people. The native speakers spoke at normal conversational speed so it was an exciting challenge to try and follow what they were saying and get the gist of their comments and answers to our questions.

I cannot recommend the Japan Foundation Intensive Language Seminar program highly enough! If you haven’t yet done one, what are you waiting for? Find out when the next one is happening and enrol ASAP!

I do hope you go along – you won’t regret it!

Seminar sessions were both practical and theoretical and covered a variety of topics such as strategies for the teacher to increase use of the target language in the classroom, effective implementation of the Australian Curriculum, use of technology to enhance Language learning and cross-curricular teaching ideas to integrate science and geography etc. with Languages studies.

Based on what was covered in the seminar, I will now make a new range of language support posters for my classroom to encourage and support greater use of Japanese during lessons. We were also provided with excellent resources to help us to cover a variety of topics including recycling, comparisons of current world issues such as global warming or comparisons of the geographical, social and cultural features of different parts of Japan with places in Australia. One website I would recommend to teachers of any language would be Tour Builder. It is a great site for creating interactive versions of tour itineraries but the example shared with us featured an interactive tour of a person’s life story showing where they have lived during their life thus far. The applications for the site could go well beyond a simple tour itinerary.

Other activities/ideas from the seminar which I plan to integrate into my lessons are:

The highlight for me was an interview/discussion session. We broke into small groups and spent a session preparing for an interview with a native speaker of Japanese. We covered in great detail tips for starting and maintaining conversations and looked at appropriate polite conversational Japanese.

Teachers of Languages are very aware of the need to constantly work at maintaining and improving language proficiency and this seminar provided us all with a practical and engaging means to that end. I am extremely grateful to The Japan Foundation for providing the seminar, to Brisbane Catholic Education for supporting my attendance at the seminar and to the other teacher participants for their collegiality and inspiration.