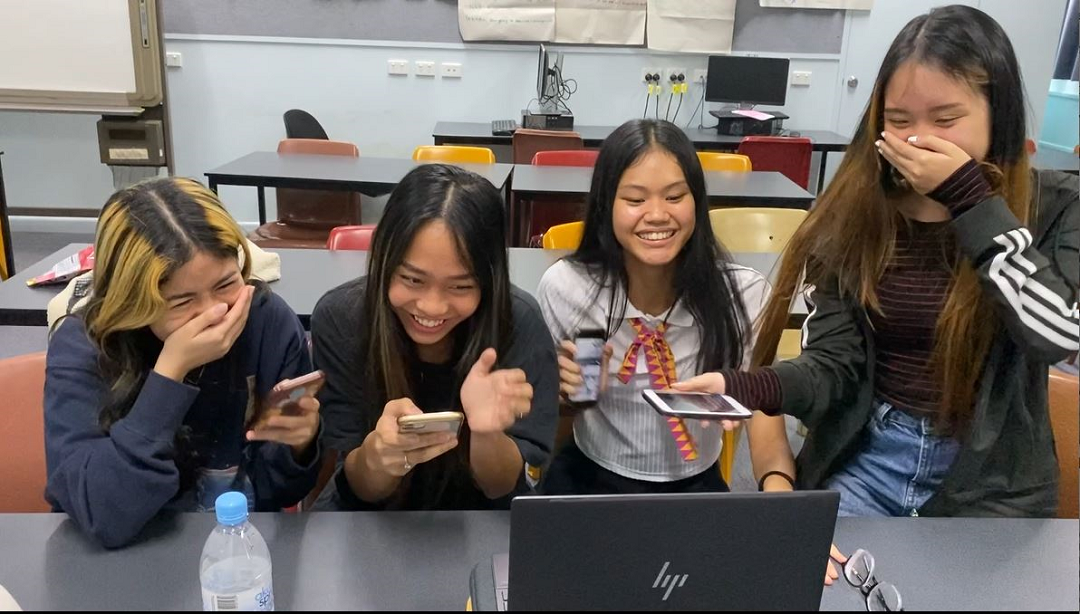 In October 2020, Mariko Ruzsicska Sensei conducted a trial online students’ conversation exchange at her school with Kumon International School in Japan. This event was organized for the Australian Olympic Connect Tomodachi 2021 Project.

Michie Akahane of the Japan Foundation, Sydney interviewed Mariko about this trial event.

Q1: Where did you find out about this trial program?

Mariko: I learnt about the program through the Japan Foundation, Sydney newsletter, my teachers’ association network and the NT Department of Education. Being unable to travel to Japan in 2020 meant a lack of opportunities to connect with Japanese people and culture. During this period, students were unable to speak to any Japanese person other than their teacher. So when I was approached by the Department of Education about this opportunity trial I signed up straight away, as I thought it was a great opportunity for my students.

Q2: How was this opportunity beneficial for your students?

Mariko: It was even more beneficial for my students than I had imagined. After the event I was overwhelmed by comments from my students about how they wished the session was longer, and questions about when the next session might be, to the point where I had difficulty answering them all. Despite leaving half an hour for students to talk, I found that they wanted to continue the conversation even further.

I was also surprised that senior students were engaging so well with the event, as normally I find they are fearful of making mistakes and remain quiet during class as a result.

During the conversation, I was a bit worried that English was dominating too much. But they were connecting enthusiastically with each other and I thought it was important to keep up the positive energy at this first meeting, so I decided not to intervene and left things as they were. 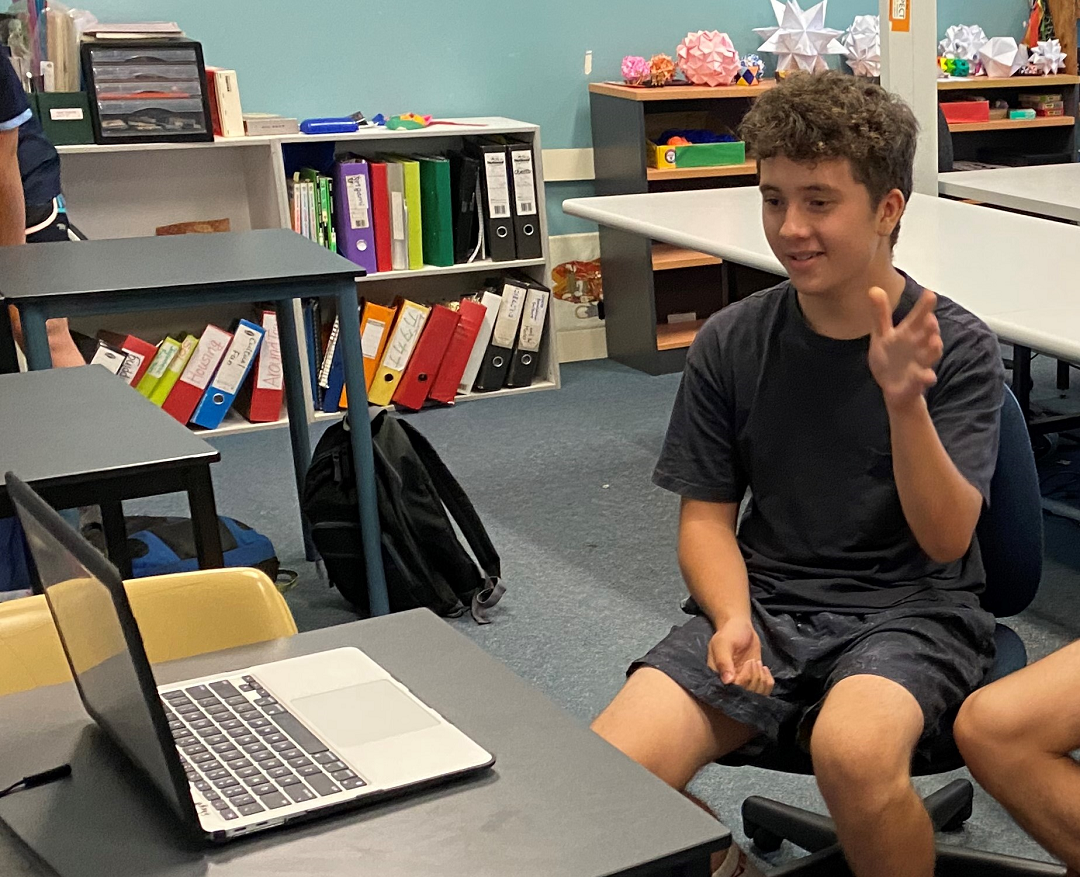 Mariko: The school is private and takes in mostly returnee students, kikoku shijo. It appears that many of the teachers are engaged to teach from English-speaking countries. The rules at the school aren’t strict and there isn’t a school uniform. While it may not be the most typical ‘Japanese school’ this was a point that students found interesting to learn about. Also, because of the kind of school that it is, the students at Kumon Kokusai Gakuen had high levels of English proficiency, so that when there were troubles communicating they could use English.

Q4. So the match-up with Kumon Junior Senior High School was a product of the ‘Friends Program’?

Mariko: Yes, that’s right. I feel that it was a really lucky match. With these sorts of programs, good communication and shared understanding between teachers are particularly important. In both the preparation for the event and the event itself, I and the teachers from Kumon Junior Senior High School were able to maintain our position of prioritising what’s most important for students. It was this shared  understanding that resulted in us not intervening when English began to dominate conversation.

Also, following the success of this trial event, we spoke about the program’s future, deciding to incorporate it into both of our teaching programs. It was also decided that we would host these exchanges about once every two weeks in 2021. We hope not only to engage students in conversation but also to share our projects with each other, and to conduct collaborative projects.

Q5. In what ways did you prepare for the 2020 program at your school?

Mariko: Preparations for the event were done during class hours through discussions among students. Because the October 2020 event was our first, self-introductions were necessary. However if that was all, the conversation would soon dry up so I asked them to think of one more topic. Following their discussions, the students decided on the conversation questions ‘what phone apps do you like?’ and ’What phone apps do you often use?’ These questions were a great success. The topic is familiar and of interest to all students, so the conversations flowed on from there very smoothly.

Actually, after the event I had a comment from a parent saying that it had been the first time that they had seen their child doing homework. As we had decided to prepare in class no homework had been set, but it seems students were coming up with questions they wanted to ask, or were wanting to practice their Japanese for the event, or for various reasons were preparing independently at home. For me as a teacher, this was a really pleasant surprise.

Q6. What were things like on the day of the event?

Mariko: We had about 20 students at each end gathering at school. After a brief introduction we split up into Zoom breakout rooms where we had about 3 students in each group. We had decided that there were too many people to have everyone in one conversation. In their groups, students took turns in the conversation. I think this number of students was appropriate for conversation.

Watching the students conversing we saw many of them help each other when they got stuck on words or expressions. Teachers weren’t able to attend to each group so students often had to help each other. This was actually a great opportunity for students to build up cooperation.

We found that when students became excited they talked very loudly. While this was positive because it showed students were engaged in their conversations, it was noisy for the other groups. I quickly organised separate breakout rooms for the groups, but changing rooms took some time. It made me realise that it was important to factor in time loss when planning conversation time. 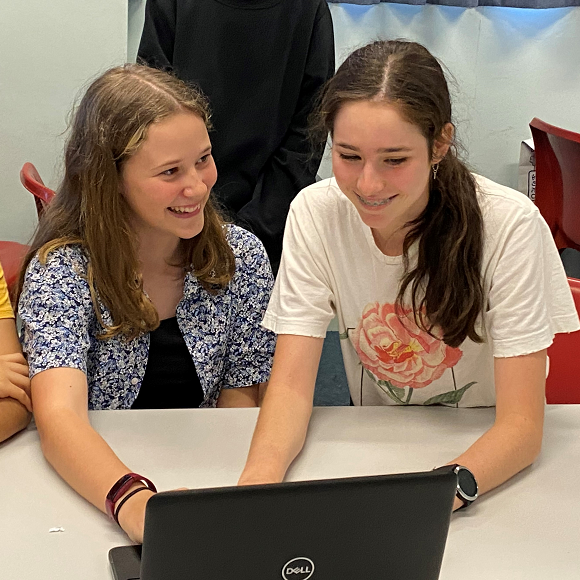 Q7. How did other teachers and the school community react to the event?

Mariko: This event was a trial and the first time for the students to meet each other so I couldn’t involve a wide range of teachers from other subjects. However, some colleagues did take an interest and the reaction from some parents was very positive, as I mentioned earlier. Giving our students the opportunity to interact with others online also creates an opportunity to promote Japanese language study to the wider school community, so I would like to actively publicise the event in the future.

Q8: What about this event do you think was most useful for students’ future Japanese study?

Mariko: I think that it’s really important for students to engage in conversation with Japanese speakers other than their own teacher, and particularly with Japanese speakers of the same age. When students talk to their teachers in the classroom, they think ‘She understands us because she’s the teacher’, and they’re also afraid of making mistakes. No matter how many times a teacher encourages them with ‘it’s okay to make mistakes’, it isn’t easy to lose this fear.

However, when students talk to Japanese speakers of the same generation as in the case of this event, a desire to communicate what they want to say takes priority. When students experience the satisfaction of getting their message across, and the added joy of finding that they are in, this flows through to their self-confidence and motivation to learn. I think that this is a great result for students’ future learning in general.

I also think that from this experience, students were able to see that communication is not about using grammar and knowledge learnt in the classroom perfectly, but about understanding each other and sharing thoughts and feelings. It also made clear the purpose of learning a language. Of course it is important to speak Japanese correctly, but this was a good opportunity to think about the purpose of communication, to reflect on good communication and how to improve it.

Particularly when students become seniors, they tend to become focused on their final exams and studying at school, but engaging in Japanese with students from outside of school and of the same age greatly stimulates students’ motivation to learn. I am convinced that the event was a great opportunity to get students focused on their learning, including their exam preparation.

Finally, the event is a great enrichment opportunity for students to experience the culture of others as well as their language. Even after finishing their schooling and university education, or rather during it, I think this is an experience that students will find useful. With this expectation, I would like to continue this project in the future.

Ms Mariko Ruzsicska, thank you for sharing your valuable stories and experiences.

Registration for the program mentioned in the article is closed.  However, if you wish to know more about the Connect Tomodachi project, the link is below.