We wrap up 2017 with the Kanji of the Year and why it was chosen.

2017’s Kanji of the Year is 北, which is read as きた in kun yomi (Japanese reading) and ホク in on yomi (Chinese reading). This kanji symbolises two people standing back-to-back and refers to opposites. 北 means the North (as opposed to South) and has another meaning which is ‘to go against’ or ‘to be contrary’. 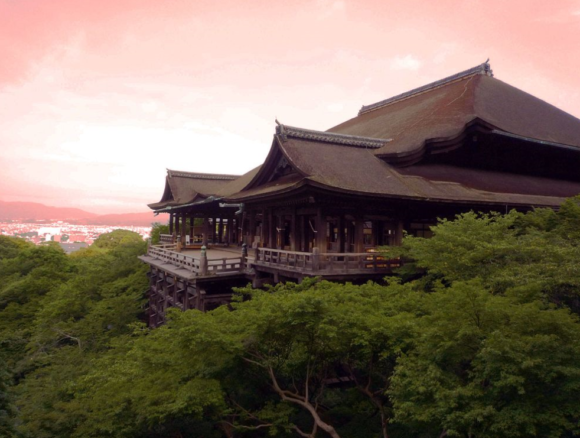 Kiyomizu temple, where the Kanji of the Year is announced.

The Kanji of the Year is chosen by popular vote. Some voters have expressed varied reasons such as, ‘I have spoken with friends more frequently about the importance of peace’, ‘I sincerely pray for the prompt recovery of the regions heavily affected by natural disasters, such as 北九州 (Kita Kyuushuu)’, and have also mentioned ポテチショック (potechi shokku), a phrase referring to the temporary discontinuation of potato chips due to a bad harvest of potatoes in 北海道 (Hokkaido)’.

Which 漢字 (かんじ; kanji) represents 2017 in your 感じ (かんじ; feelings)? The 漢字 that represents 2017 for me is 楽, as in 楽しい (たのしい; happy) and 楽 (らく; easy and relief). My daughter’s return to Sydney from Japan after a year away has made us a happy family again. My sons have started part-time jobs and often treat us to dinner when we dine out which makes us proud, and is also a financial relief!

The Kanji of the Year was started by The Japan Kanji Aptitude Testing Foundation (日本漢字能力検定協会) in 1995. Every year, the Kanji of the Year is announced by the Chief Buddhist priest through a calligraphy performance on 12 December at Kyoto’s Kiyomizu Temple. They also broadcast the announcement live through the internet.

Overseas votes are accepted, so why don’t you vote in 2018?

Derivation and meaning of kanji 北