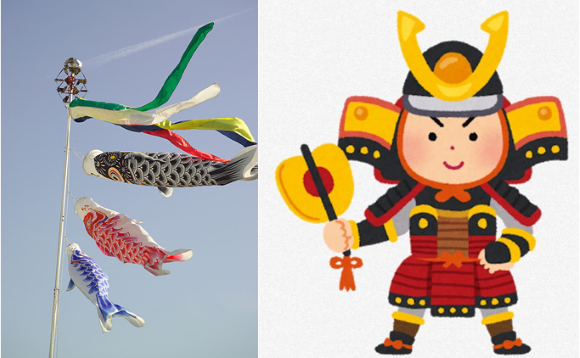 May 5th is Children’s Day in Japan, when carp streamer swim in the sky and samurai warrior dolls are displayed in the home.

Children’s Day is said to be a day for boys, but in ancient times it was a day for women. In the old way of Chinese thinking, the fifth month was thought to be ominous, and the fifth day if the month was considered to be particularly bad. This idea was introduced into Japan, and May 5 came to be a day on which activities were carried out to ward off evil.

May is the rice planting season in Japan. Long ago, rice planting was considered to be women’s work, and the women who planted rice spent May 5 quietly gathered together in a hut so as not to be disturbed by evil spirits. These women surely appreciated this rest day during the busy rice planting period!

May 5 came to be known as a boy’s festival in the Kamakura period (12-14th centuries). During this period, the samurai would repair armor and helmet in the house around May and take the repaired items to the shrine to pray for good luck on the battlefield. From the Edo period onwards, the practice to be carried out in the home, where genuine items were swapped for dolls. The flying of carp streamers at homes of the samurai warrior classes also began in the Kamakura period, and came to decorate ordinary homes from the Edo period. Legend says that a koi (carp) fish climbed a waterfall and in doing so became a dragon. Based on this myth, the fish is considered as a symbol of strength and success.

Though fewer people keep the practice today, some engage in the traditional custom of bathing in iris-leaf baths called shōbu-yu. The iris has a refreshing aroma and is used as a traditional medicine. It was thought that its strong medicinal effects and fragrance could ward off evil spirits. It is still used in aromatic oils and disinfectants to this day.

The seasonal sweet kashiwa-mochi, rice cake filled with red bean paste and wrapped in a Japanese Emperor oak leaf, is traditionally eaten on Children’s Day. The young leaves of the kashiwa, or Japanese Emperor oak, were first used to wrap this sweet because of the leaves’ aroma and antibacterial effects. Many wonder whether you can eat the leaf in which kashiwa-mochi is wrapped, given that we eat the cherry blossoms leaves used to make sakura-mochi. According to sources online, you can eat the kashiwa leaf if you really want to, but it is quite tough and doesn’t taste all that nice.”