In March 1964, Ian Fleming published the eleventh James Bond book, You Only Live Twice, which is set in Japan. It was made into a film in 1967, starring Sean Connery as James Bond. In 1970, Roland Barthes published his famous book The Empire of Signs, after three trips to Japan between 1966 and 1968.

While these two works seem to belong to very different genres—Anglo-Saxon popular culture in one case, Parisian avant-garde in the other—and in spite of obvious contrasts, they share a surprising amount of common ground. This talk will chart the numerous similarities between the universe of Roland Barthes and the fantastical world of James Bond, focusing on four key topics at the heart of the two works: sex, violence, haiku and the alleged topsy-turvy dimension of Japan. In doing so, it will reconstruct a certain view of the Japanese Orient that permeated the Western world of the 1960s, especially in the context of the 1964 Tokyo Olympic Games. 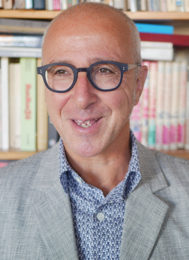 Emmanuel Lozerand is a Professor of Modern Japanese Literature at the National Institute for Oriental Languages and Civilizations in Paris, France. His research centres on the language, literature, thought and history of pre-war modern Japan, and prominent authors such as Natsume Soseki and Mori Ogai who were active around that time. He is also interested in the changing concepts of family and the individual in the context of modern Japan.

RSVPs for this event have closed.

This talk is presented in partnership with the Department of Japanese Studies, School of Languages and Cultures, The University of Sydney.