Mutant Urbanism in Japanese Architecture: Lessons from the Metabolist Movement

Learn about One of Japan’s Most Iconic Architectural Movements

In 1960, Japan was on the cusp of transformation. Post-war recovery gained critical momentum and technologies advanced. Cities were growing rapidly, and a new need for mass housing and infrastructure sparked challenges and opportunities in the urban context.

A group of young Japanese designers and architects were eager to respond creatively to this new landscape. The occasion came at the World Design Conference in Tokyo, when they presented a manifesto titled METABOLISM/1960–Proposals for a New Urbanism, championing then-innovative concepts such as capsule architecture and prefabrication, and embracing bold forms, sophisticated architectural elements and massive urban structures that continue to fascinate designers today.

This talk introduces the work of the Metabolists. It examines the merits and limitations of the urban architectural projects and planning schemes they developed in response to Japan’s rapid post-war urbanisation. It also reflects on the lessons and legacy of the Metabolist oeuvre, sixty years on from the manifesto’s release. Ultimately, it considers how the visions and ideas of this dynamic but fleeting movement might be reinterpreted and adapted to address the future needs of contemporary cities. 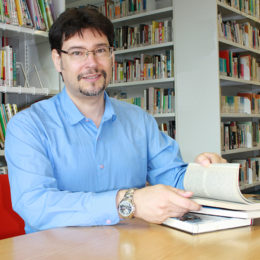 As a past recipient of the Japanese Ministry of Education (Monbusho) Scholarship and Japan Society for the Promotion of Science (JSPS) Postdoctoral Fellowship, Dr Pernice has spent significant time conducting research in Japan. Most recently, he was awarded a Japan Foundation Fellowship in 2019 to research the relationship between the Metabolists and the housing industry in post-war Japan.

Dr Pernice will extend his work on Metabolism by convening an international symposium at UNSW Sydney titled “Architectures for a Mutant City. 60 Years of Metabolism 1960-2020, and Beyond” on February 22-23, 2021, supported by The Japan Foundation.

Metabolism is the name of a group of young Japanese designers and architects who advocated for a new form of post-war urbanism built on visionary projects and experimental avant-garde design. ‘Metabolism’ is also sometimes used in the English-language context to refer to the architectural styles and concepts espoused by the group.

The Metabolism group led one of the most iconic movements in postwar Japanese architecture. The Metabolist style is rooted in the fundamental notions of cycles of use, nomadism, modularity, compact urbanism and replaceability, and is inspired by the biological metaphor of organic growth. The Metabolists were active in Japan from 1958 to the 1970s, and the group was formalised in 1960 with the publication of the Metabolist Manifesto.

Key figures associated with the Metabolist school include renowned architects Kenzō Tange, Kishō Kurokawa, Fumihiko Maki, Kiyonori Kikutake and Arata Isozaki (albeit not a formal member), as well as critic Noboru Kawazoe and designers Kiyoshi Awazu and Kenji Ekuan (known for his design of the Kikkoman soy sauce bottle). Examples of Metabolist architecture include the Nakagin Capsule Tower in Tokyo, and the 1970 Osaka World Exposition site, as well as many of its pavilions and structures.

For onsite attendance (limit of 25 persons):

Due to capacity limitations, onsite attendees must register to attend this event and will be required to check in at reception on arrival. In-person attendees are encouraged to wear a facemask.

Note: Conditions for the onsite portion of this event are subject to change based on COVID-19 restrictions.

The lead image on this webpage is a 3D rendering based on Kiyonori Kikutake’s unbuilt Marine City design, created by Antxon Canovas. Reproduced with permission (source).