A game with one hundred graceful Japanese waka poems
September 21, 2019

Hyakunin Isshu is an anthology of one hundred Japanese waka poems composed between the 7th and 13th centuries. The anthology was later adapted into a card game deck and played a significant role in familiarising Japanese people, both young and old, with classic literature. This traditional game has gained its popularity amongst young Japanese people lately due to the hit manga Chihayafuru as well as its anime and film adaptations.

The objective of the game is to listen the poems be recited in a random order and capture the corresponding card as quickly as possible. The player who collects the greater number of cards by the end is the winner. The deck for capturing displays shimo-no-ku only, therefore players who remember entire verse can make an early move, which is the greatest advantage in this game. 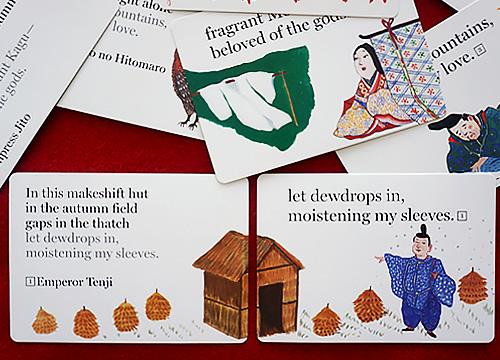 You may have known game of Hyakunin Isshu for a long time, but never tried it before due to the language barrier. This is your chance to start the game with this English translated version “Whack a Waka“. It is new, thus it has not been played by anyone (even by Japanese Hyakunin Isshu fanatics!) before, so everyone stands on the same ground.

Every poem has been translated into a 5-line English poem. The capturing cards displays only the latter part of the poems, just like the Japanese version. However, you will notice the English version has visual clues even on the capturing cards, whereas the Japanese version displays only text. This offers a risky but rewarding strategy: connect the first part of the recited poem to the illustration on a card and capture the card before the poem reading reaches the core part of the poem!

Please arrive promptly at 12pm. We will play a game after brief introduction. 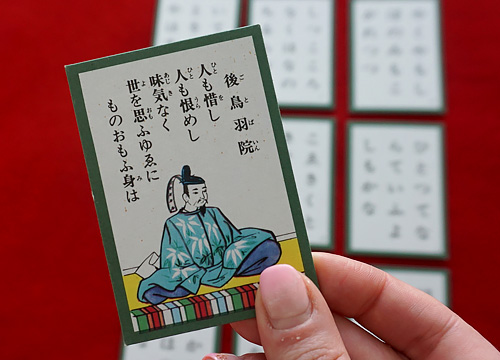 Following the English session, we have an organized game start for the Japanese cards. You can choose which level you would like to play.

Free; no bookings required.
Limited capacity; first-come, first-served.
Children aged 12 or younger must be accompanied at all times by an adult guardian.