Breathing Buildings is an exhibition of works by artist and architect Ainslie Murray in response to three buildings by acclaimed Japanese architect Kengo Kuma. The exhibition features a series of moving images and installations exploring qualities of material dissolution based on real spatial experience, and conceptualise the buildings as a series of filters that act between body and environment.

Kengo Kuma, who is currently designing Sydney’s new civic centre in Darling Harbour, is famed for his expert use of light in architecture.  With a progressive use of natural materials, Kuma’s designs connect to the world outside the building, and offer a unique connection to space and place.

Murray responds to the Kuma’s architecture by highlighting the subtle qualities of space created in buildings. Through meditative video sequences of three distinct buildings, Murray draws attention to the architect’s sensitive use of materials, and the creation of patterns and movement in the architecture. She creates an immersive environment for contemplation, through deconstruction and reassembly in the editing of the video.

Also on display are Murray’s drawings in powdered glass which resonate with the ethereal qualities of light in Kuma’s buildings, showing interpretive architectural elevations of Kuma’s buildings. 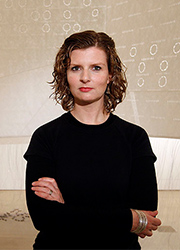 Ainslie Murray is an interdisciplinary artist, architect and academic working principally in installation. The artist states, “my work explores the augmentation of architectural space through subtle realisations of intangible, hidden, and forgotten spatial forces.” Initially informed by a research residency in Kyoto a decade ago, Murray has continued to engage with the aesthetic principles in Japanese architecture, most recently through the work of Kengo Kuma.

A Senior Lecturer in UNSW’s Faculty of the Built Environment, Dr Murray exhibits nationally and internationally and has shown work in China, Denmark and Scotland. Murray has received awards for her creative research practice from the Australia Council for the Arts and NAVA, as well as scholarships and international residencies including the Banff Centre in Canada and La Cité Internationale des Arts in France.