Updated Conditions of Entry from January 4

In 2022 our gallery will reopen for visitors from January 4 (Tuesday), with the library reopening on January 8 (Saturday). All visitors to The Japan Foundation, Sydney are required to wear a face mask, in line with public health measures announced by the NSW Government. Before visiting us, please read our updated conditions of entry here.

Discover Japan’s rich graphic design culture in A Sense of Movement: Japanese Sports Posters. This exhibition features 24 posters by six Japanese graphic designers, from great masters such as Yūsaku Kamekura (1915-1997) and Tadanori Yokoo to young professionals who are currently active in the field, like Yuri Uenishi. A Sense of Movement explores Japan’s visual identity and how these uniquely creative minds have used two-dimensional printed media to convey sport and its ‘sense of movement’ throughout the decades.

Co-presented by The Japan Foundation, Sydney and the DNP Foundation for Cultural Promotion, this exhibition was planned and inspired by ginza graphic gallery curator Eishi Kitazawa’s lecture Conjuring a Sense of Movement–Japanese Graphic Designers & Sports Posters held at The Japan Foundation, London in September 2020. After being presented in Sydney, the exhibition will travel to venues in Paris and Toronto with an extended range of  exhibits.

An event program accompanying the exhibition will be announced at a later date.

A Brief History of Sport and Design in Japan

The pictographic design and branding of the Tokyo 1964 Olympic Games forged the nation’s post-war identity, as Yūsaku Kamekura’s iconic logo saw Japanese graphic design enter the international stage for the first time. The work features a large red circle on a white background with five golden rings interlinked above, accompanied by a gold sans-serif typeface reading “Tokyo 1964”. This simple yet powerful motif has become the foundation of Japanese design and still reverberates through the design world to this day, influencing every international sporting tournament since.

Designers such as Ikkō Tanaka and Shigeo Fukuda have further solidified Japan’s global image with their eye-catching designs, often incorporating traditional Japanese motifs, as well as folklore, animals and landscapes reminiscent of the nation.

The compositional beauty, dynamism and humour expressed within the posters featured in A Sense of Movement are communicated through the perspective of sports, and serve to summon the viewer to the world of Japan’s unique graphic design culture.

Born in 1930 in Nara Prefecture. Ikkō Tanaka graduated from the Kyoto City University of the Arts in 1950. In 1960 he took part in the establishment of Nippon Design Center Inc., and established his independent office, Ikkō Tanaka Design Studio in 1963. He has worked on numerous major events including the Tokyo Olympics (1964) and EXPO ’70 in Osaka (1970). In 1975 he was appointed as the creative director of Seibu Ryutsu Group (Seibu Distributive Group). He has received several awards including the JAAC Special Selection, New York ADC Hall of Fame Prize, Tokyo ADC Members’ Grand Prize, and the 1st Yusaku Kamekura Award.

Born in 1940 in Kanagawa Prefecture. Katsumi Asaba studied over a period of five years from the age of 19 at the Satō Keinosuke Typography Research Institute. In 1975 he established the Katsumi Asaba Design Studio. As an art director, he has produced many masterpiece posters and commercials that are recognized as significant milestones in the history of Japanese advertising. In 1987 he established the Tokyo Type Directors Club (Tokyo TDC). He has received numerous awards and honors including the Japan Academy Award for Best Art, the Tokyo ADC Grand Prize, Medal of Honor with Purple Ribbon, and the Order of the Rising Sun. He is the Japan representative in Alliance Graphique Internationale (AGI), and is councilor and international commissioner of the Japan Table Tennis Association. He holds a 6th rank (dan) of the proficiency in Table Tennis.

Born in 1932 in Tokyo. Shigeo Fukuda graduated from Tokyo National University of Fine Arts and Music in 1956 and established his own design office in 1958. He has been involved in the design planning for numerous public events in both Japan and abroad, including the Tokyo Olympics (1964) and EXPO ’70 in Osaka (1970). Fukuda has designed a wide variety of posters, objects, and toys that are rich in humor and wit through incorporating effects of optical illusions. Fukuda is recognised as one of Japan’s leading graphic designers and In 1980 he was bestowed a Medal of Honor with Purple Ribbon by the Japanese Government.

Born in 1936 in Hyogo Prefecture. Contemporary artist. Since his solo show at The Museum of Modern Art (MoMA, NYC) in 1972, he has continued to present his work in numerous exhibitions in both Japan and abroad. He has taken part in numerous international exhibitions such as Biennale de Paris, La Biennale di Venezia, and Bienal de São Paulo, further receiving high acclaim for his solo exhibition at the Fondation Cartier pour l’art contemporain in Paris in 2006. His works are housed in the collections of over a hundred museums and institutions throughout the world. In 2000 he was inducted into the New York ADC Hall of Fame.

Born in 1987 in Tokyo. She joined Dentsu Inc. in 2010, after graduating with a B.A. in Graphic Design from Tama Art University, subsequently establishing her own design office in June 2021. Since then she has worked on a wide range of projects from graphic design for posters, logos, packaging, to integrated branding campaigns. Her representative works include posters for the 2015 World Table Tennis Championships (TV TOKYO Corporation), #SHEMOVESMOUNTAINS (THE NORTH FACE), and ISSEY MIYAKE PLEATS PLEASE 2018 FLAGS (ISSEY MIYAKE). Her major awards to date include the Tokyo ADC Award, Cannes Lions Gold Award, New York ADC Gold Award, D&AD Gold Award. In private she is an adventurer who loves traveling around the world, as well as snow mountain climbing.

Born in 1915 in Niigata Prefecture. Yūsaku Kamekura joined the editorial production company “Nihon Kōbō” in 1938, where he served as art director for a series of magazines such as NIPPON and Kaupapu. In 1960 he took part in the establishment of Nippon Design Center Inc., thereafter setting up Kamekura Design Institute, in 1962. His representative works include posters for the Tokyo Olympics (1964), EXPO ’70 in Osaka (1970), the Hiroshima Appeals campaign, and logo marks and logo types for NTT and Nikon. In 1978 he was appointed as the first president of the Japan Graphic Designers Association (JAGDA). In 1980 he was bestowed a Medal of Honor with Purple Ribbon by the Japanese Government, and in 1991 was designated a “Person of Cultural Merit.” In 1993 he was inducted into the New York ADC Hall of Fame, and in 1994 the Academy of Fine Arts, Warsaw bestowed on him its first Honorary Doctorate. 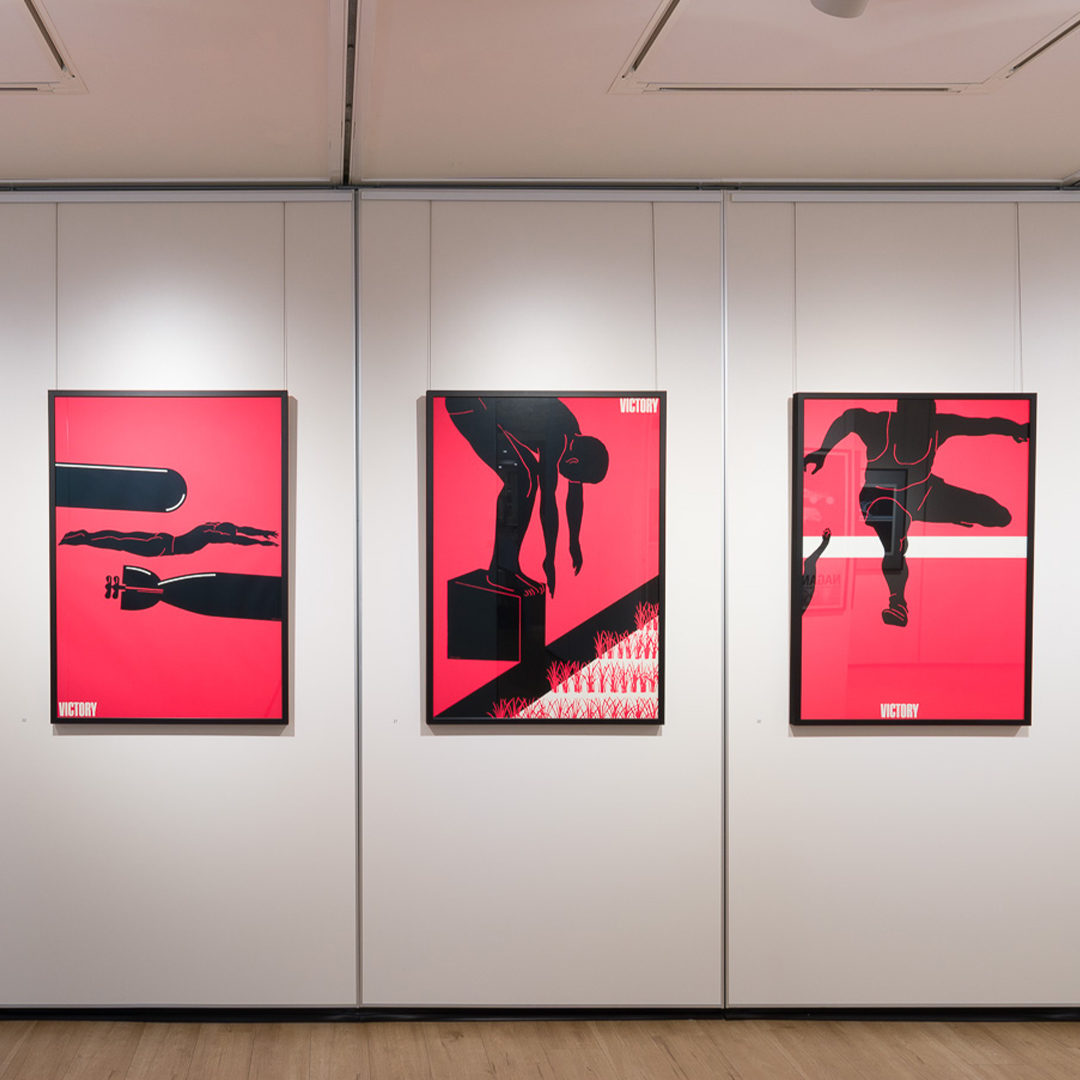