A childless couple discover a baby inside a peach. The baby’s name is “Momotaroo” Peach Boy. The oni from the nearby island Oni-ga-shima raid Momotaroo’s village and steal all their treasure on a regular basis. When Momotaroo turns ten he decides to travel to Oni-ga-shima in order to retrieve the villagers’ belongings. On his way, he meets a dog, monkey and pheasant, all of whom accompany him on his journey to help fight the oni. 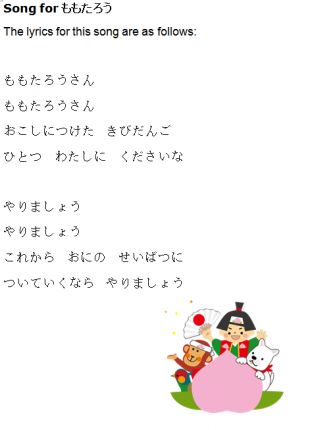 Japanese ogres which feature in many folktales. They are large, fierce looking creatures with horns and bulging muscles, and are often red or blue in colour.
(See こぶとりじいさん)

a millet dumpling, specific to the Kibi region of Japan (modern day Okayama). You can still buy kibidango in Okayama, although they are smaller than the original dumpling size.

There is a cycling path on the outskirts of Okayama City (called the Kibi Plain Cycle Path) which takes you to Kibitsu-jinja, the shrine devoted to Momotaroo. You can also visit Megi-jima (also known as Oni-ga-shima, Oni Island). It is said to be the site of the clash between Momotaroo and the oni, and is located off Takamatsu, Shikoku.